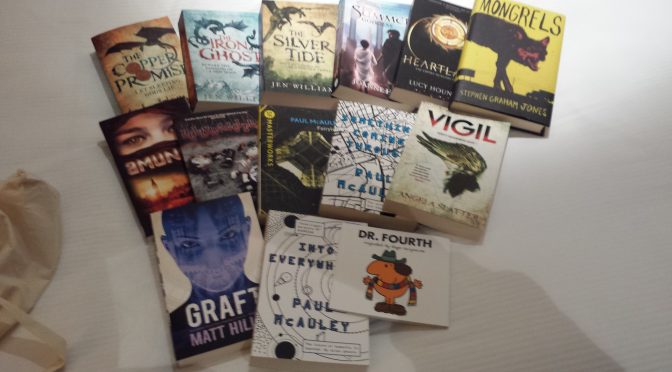 This weekend I’ve been in Bristol, enjoying the hospitality and all round fun of the one day convention they call BristolCon. It was my first experience of this particular convention, and I have to admit it was a really good weekend.

Even though the official day of the con was Saturday, things kicked off on Friday night with an excellent panel at the local Waterstones, where the authors Jen Williams, Anna Stephens, Anna Smith-Spark, Lucy Hounsom and Joanne Hall discussed the role of women in genre fiction both as authors and as characters. After the panel I hung around to chat to the authors and other folks, got a few books signed and then headed back to my hotel and stayed up way later than I should have done chatting.

Saturday morning I collected my goodie bag from the convention organisers, along with an official BristolCon 2017 t-shirt and then settled in for some cool panels and a couple of helpful workshops. There was so much going on that a lot of the time it was hard to decide which panels and workshops I wanted to attend.

The first one of the day for me was a panel on Gender Flipping and Gender Fluidity, with Joanne Hall, Virginia Bergin, Joel Cornah, Tej Turner and Lucy Hounsom. There were a lot of good points raised by the panelists, and I get the feeling they could have discussed the subject for several hours more.

Next up was a panel on how the Western has influenced sci-fi and fantasy, with panelists Peter Sutton, Jonathan L. Howard, Stark Holborn, Ian Millsted and Terry Jackman. Again, some interesting points were raised, though the impression I got was that sci-fi owes more to Westerns than fantasy does.

My third panel of the day was a discussion of the right and wrong ways that infodumps are used in genre fiction, though I suspect many of the points raised here would also apply to non-genre fiction. The panelists in the case were Juliet E. McKenna, Jacey Bedford, Peter Newman, Ellen Crosháin and Dyrk Ashton.

After three panels back-to-back I decided to take a break for some food and then drifted around the art room, where I bought a m ap off of Sophie E. Tallis and then had a great conversation with her and Ellen Crosháin about my current work in progress. I also stopped by the dealers’ room and bought a few books, chatted to a few more people and generally got made to feel welcome.

After lunch, the next panel was about mapping SF & F worlds, involving the panelists Sophie E. Tallis, Anna Stephens, Juliet E. McKenna, Andy Bigwood and Joel Cornah. Together they discussed the process of collaboration between writer and artist in making effective maps, how the maps can then go on to affect the writing process, and even the necessity of maps in speculative fiction.

To round the day off I sat in on a couple of workshops. The first one, hosted by Jessica Rydill, was about Writing and Mental Health and whether mental health issues help or hinder the writer. The second was a workshop in how to stage manage and craft violence in fiction, hosted by Dev Agarwal, with help from Piotr Swietlik. Both of the these workshops were useful in so many ways, and as with the ones I attended at EdgeLit back in July, I came away with a lot of thoughts and ideas bouncing around my head.

All in all I genuinely had a great time at BristolCon, but for me the biggest aspect was how amazingly inclusive it all felt. I must have interacted with fifty or sixty people while I was there and not once did anyone question my name or gender identity, and with the exception of one genuine mistake, nobody misgendered me. That for me is the big take-home of the event – just how accepting and inclusive this community of genre fans and producers are.

I am definitely going to be back there next year, and will also try and make it to a few other conventions along the way. The next one that’s caught my eye is FollyCon at Harrogate next Easter, so let’s see if I can make it to that one.