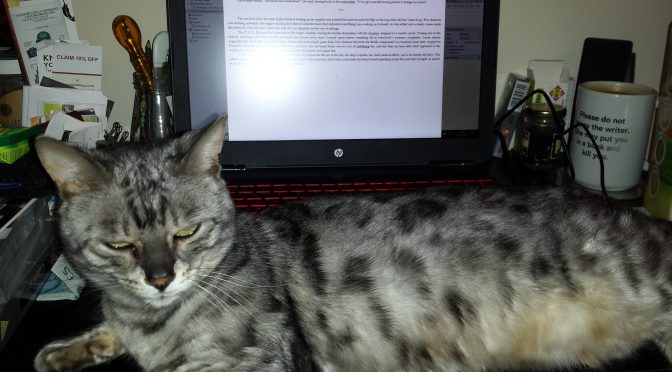 So, it’s been a while (she types whilst listening to Staind)…

There’s been a lot going on in my life recently, though most of it has been connected to my day job and my personal life. As a result I’ve not had a whole lot to post on here: no new painted miniatures to show off, no pretty screenshots from any computer games despite a new laptop that’s surprisingly good for gaming with, and not really all that much to talk about with regards to my writing. Having said all that, I thought it would be nice to log on to the old blog and say hello, just so all two of my regular readers know I haven’t gone running off with a passing GSV.

On the writing front, I am still churning out words fairly regularly, though currently not as quickly as I’d like to. I have two major projects on the go at the moment, along with a trio of short stories that I originally planned for the Sheffield Sci-Fi and Fantasy Writers’ Group’s Write a Book in a Day event last year. I’m hoping to submit the short stories, currently known as The Schism Triptych, for the next SSFFWG event, and hopefully they will be good enough to make it into print, though obviously this will depend on the decision makers at the SSFFWG.

On the social side of things I made it down to Derby for EdgeLit 6 last month, and had a fantastic day there. I got a chance to speak with a number of authors I respect, and picked up a whole bunch of signed books. I also took part in a couple of workshops.

The first was run by Emma Newman and was about overcoming psychological barriers to writing. This is something I really needed help with, and the advice she gave has helped me focus more and spend more time in front of the keyboard..

The second workshop was run by Peter Newman and was about overcoming writer’s block. In this one he each of the attendees a chance to describe one of their current projects and explain where and why they were stuck. He then brainstormed with the group to help find a way past the block. Again, this really helped me with one of the two projects I’m working on and while I’ll admit I didn’t take the specific route that was suggested on the day it did give me an idea for a new direction to take the scene I was stuck with.

As well as the workshops I listened in on a few panels and author Q&As, and attended a book launch for four small press books. Then in the evening there was the Gemmell Awards Ceremony.

Put simply, I had such a good time down in Derby that I’ve now booked myself tickets, travel and hotel for BristolCon in October.

And that’s about it for now. I’d like to say I’ll be back again soon with more news but knowing me it could well be another four months. Or more.