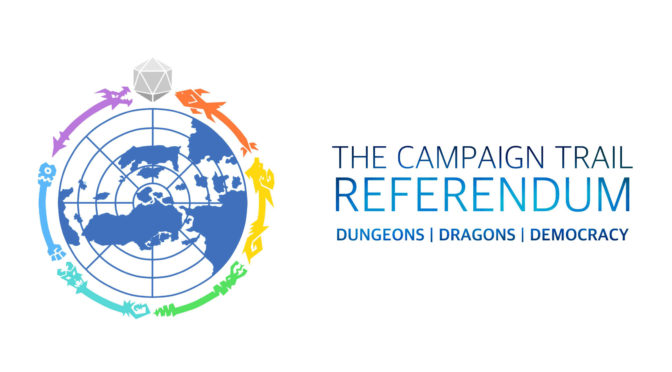 Last year I was fortunate enough to be involved in the first series of The Campaign Trail, a Dungeons and Dragons podcast that takes a somewhat tongue-in-cheek look at politics in a fantasy world. Well, series two is almost upon us and once again I am honoured to be a part of this amazing production.

The first series of the podcast followed the adventures of a group of mismatched political campaigners as they travelled from constituency to constituency in order to try and convince the locals to vote for their patrons, the Fable Party. It was a strange and wonderful journey, and while I only had a small part to play in the proceedings I loved every second of the experience.

This time around I get to play one of the main characters, which means all you lovely people get to hear my dulcet tones in every single episode. And if that isn’t enough to convince you to tune in then series two also sees the return of the three original players, Steven Poore, Aym Maidment and Joanne Hall.

As with the first series, everything is beautifully brought together by the multi-talented Joel Cornah, and if the episodes we’ve recorded so far are any indication this new series is going to be several levels above what’s gone before.

Series two is due to begin in full next Sunday, 30 August, but tomorrow you will be able to get a taste of what’s to come when the introductory episode, session zero if you like, goes live on various podcast libraries and streaming services. In the meantime you can listen to the official trailer below.

If you haven’t already enjoyed the crazy that is series one you can catch up with it on Soundcloud, and you can learn more over on Twitter, Facebook or Tumblr.