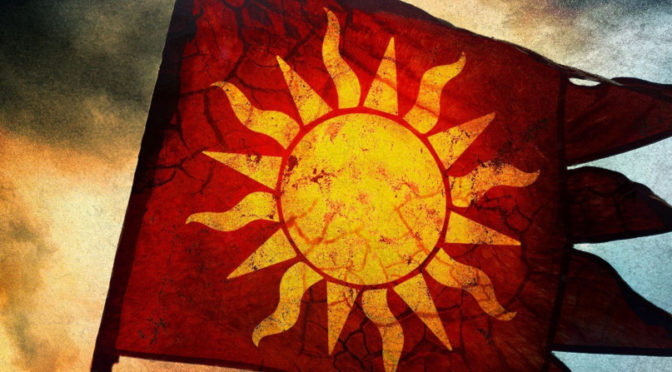 A Little Hatred by Joe Abercrombie
My rating: 4.5 of 5 stars

DISCLAIMER: I received an advanced reading copy of this book courtesy of the publisher and NetGalley in return for an honest review.

I was a little concerned going into this book as I’d already seen a number of reviews saying that despite it being the first of a new series, you really had to have read Abercrombie’s First Law trilogy in order to fully appreciate this new novel from the self-appointed Lord of Grimdark. Given that I’m a veritable Abercrombie virgin, I was worried that I’d miss out on some hidden plot lines or fail to grasp the mysterious twists and turns that link back to his earlier works. Having now finished the book I think I can say with some authority that even if you’re as new to Abercrombie as I was you can read and enjoy this delightfully refreshing novel.

Set several decades after the events of The First Law, this novel takes place in a world in the grip of the early years of an industrial revolution. Machines are being used to gradually replace the labour of the masses, leaving those masses out of work and embittered. A rebellion is forming, and it is up to the agents of Grand Lector dan Glokta to end the revolution before it begins. Meanwhile, on the border of the Union there’s a war brewing, and the armies of Stour Nightfall threaten to bring down the hard-won Protectorate of the North.

What we have here is a deliciously well-written novel that manages to bring something a little different to the fantasy genre. There are still some pretty blatant elements of the magical and mystical presented within the narrative, most notably in the character of Rikke and her prophetic Long Eye, but then there’s also the treatment of the rise of the machines. Here we get to see both sides of the social divide, with sympathetic characters being drawn from both the privileged noble classes and the downtrodden working classes of the revolution.

The storytelling itself is phenomenal, but it’s in the character development and the growth of the narrative that Abercrombie seems to excel. Even the more repellent characters are presented in a delightfully readable manner, and the gradual unveiling of the manipulations going on behind the scenes leaves the reader with plenty of questions for book two and beyond. By the end of this book I was left with no doubt that there’s a lot more going on than this first chapter has revealed, and look forward to the next instalment with bated breath.

I daresay I might have gotten more out of the narrative if I’d previously read The First Law as other reviewers seem to suggest, but even without that prior knowledge this is still a remarkably strong first instalment and racks up a strong four and a half stars as far as I’m concerned.