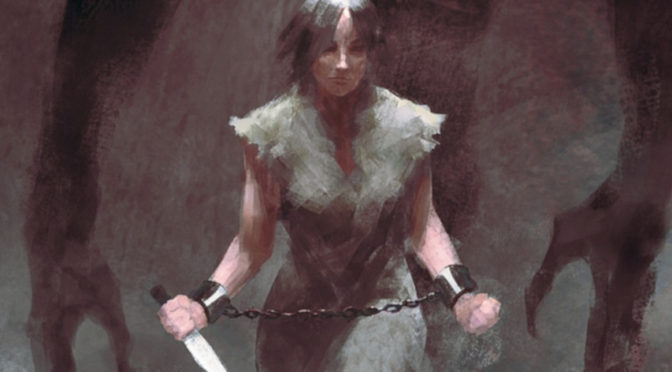 Along the Razor’s Edge by Rob J. Hayes
My rating: 5 of 5 stars

DISCLAIMER: I received an advanced reading copy of this book from the author in return for an honest and unbiased review. My thanks to Rob J. Hayes for giving me the chance to read and review this book.

At fifteen years old Eskara Helsene has suffered more pain and torture than most people experience in a full life. Taken from her home at the age of six and trained in the arts of Sourcery by the Orran Empire, she is one of the last Orran Sourcerers alive. The only problem is that she, along with her best friend and fellow Sourcerer Josef, are prisoners of the Terrelan Empire, captured at the end of a war the Orran’s lost and thrown into an inescapable prison known as The Pit. And without the Sources they need to fuel their magical abilities there appears to be no way for them to escape their predicament.

Rob J. Hayes has written and published a fair few books over the last few years, and picked up a few accolades along the way. His 2017 grimdark novel Where Loyalties Lie won that year’s Self-Published Fantasy Blog-Off (SPFBO), and last year’s wuxia-inspired Never Die is currently a finalist in this year’s competition, so it’s fair to say I had some pretty high expectations for this, the first novel of his latest trilogy. I wasn’t disappointed.

Along the Razor’s Edge is a dark novel, even by Hayes’ normal standards. The main protaginist and central point of view character is a fifteen-year-old girl who’s been spend most of her life being tortured by the tutors of the Orran Academy of Sourcery. She’s been exposed to the horrors of the Otherworld and forced to commit atrocities for her nation in what was ultimately a futile war against the neighbouring Terrelan Empire. And that’s before she gets thrown into the Pit to deal with the daily ministrations of the sadistic foreman Prig and the unnamed Overseer who holds her fate in his hands.

Told in the first person, the narrative switches between the ‘present’ of Eska’s time in the Pit and her past coming up through the Academy, though there are occasional flash-forwards to things in Eska’s future. Right from the start we know that she escapes the Pit, but it’s how she escapes that makes this story compelling, the journey she has to take to win her freedom by the end of the novel. That journey isn’t an easy one, and Eska has to make some hard choices along the way, pushing aside friends and making questionable alliances in order to gain even the smallest advantage. This is a journey into a darkness that’s both literal and metaphorical.

Despite the darkness of the story, this is so well written that it’s hard to put down. Hayes has definitely come a long way as writer, and I wouldn’t be surprised to see his name cropping up on more shortlists in the coming years. He has a way of getting under your skin and making you feel what the characters feel, of almost forcing you to empathise with the protagonists, no matter how unpalatable their actions may be. Even when the protagonist herself is telling you how much of a bad guy she’s been, you still want to forgive her for the things she’s done to get to that place.

I can’t recommend this book enough. If you’re a fan of grimdark then you really need to wrap your eyes around this one when it comes out at the end of the month. I’ve already got the second book on pre-order, and as soon as the third one becomes available I’ll be ordering that as well.