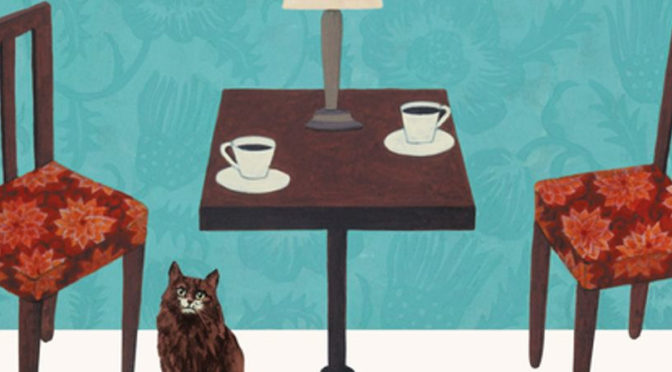 Before the Coffee Gets Cold by Toshikazu Kawaguchi
Translated by Geoffrey Trousselot
My rating: 3.5 of 5 stars

DISCLAIMER – I received an advanced reading copy of this novel from the publishers via NetGalley in return for an honest review.

When I originally read the synopsis for this book I was more than a little intrigued by the premise it presented. A coffee shop in the heart of Tokyo, where patrons could travel back in time in order to revisit past loves or spend one last moment with a lost family member, or even to meet the daughter they never knew. It’s a premise with a lot of promise, and suggested the potential for a refreshingly thoughtful exploration of the human condition which is often absent from a lot of modern fiction. Unfortunately, the end result doesn’t quite measure up to the promise of that synopsis, and I’ll admit this has slightly disappointed me.

The narrative is broken up into four primary tales, each of which is told primarily from the point of view of that tale’s time traveller. The time travel itself is enacted by sitting in a specific chair in the coffee shop and being poured a cup of coffee from a special pot. The chair in question is normally occupied by the ghost of an unnamed woman and there are several rules that each traveller must conform to in order to complete their trip. Indeed, the book’s title references the most important of the rules, that the traveller must finish their cup of coffee before it gets cold, thereby triggering the return journey, or be trapped forever as the ghost in the chair. While the rules seem a little arbitrary and contrived, it’s fairly easy to see why the author’s set them up in this way as a means to limit the scope of each of the mini vignettes he’s presenting. This conceit results in tales that are most definitely focused on the character rather than the action, providing a wonderfully tight view of the changes in each of the principle characters when they return to the present.

The set up to the tales often feels like directions for a stage play, from the small scale of the setting to the way in which every action and every detail is meticulously laid out, but that’s hardly surprising given that the author is first and foremost a stage writer and this novel is an adaptation from one of his plays. If you’re comfortable reading stage plays then you’ll have no problem getting to grips with this one.

Unfortunately, the whimsy and focus of the narrative are let down somewhat by the prose itself. Now, I don’t read a huge number of translated works, but nor am I a complete novice in that respect, so I’m reasonably confident when I say the biggest problem I’m having with this book is the translation itself. The core tale itself is delightfully whimsical, and the characters are nicely presented, their individual personalities showing through despite the linguistic acrobatics taking place. It’s almost as if the translator is trying too hard to make the English language edition read as if it’s still being presented in Japanese, which is jarring even when you’re familiar with the differences between Japanese and English syntax and grammar. I feel as though the translation truly doesn’t do justice to the narrative, and that’s a shame because I feel this book could have been so much more satisfying to read with a different translation.

If I’m rating the novel itself than I’d give it a full four stars, but the translation brings it down. Making allowances for the translation, I’d have to settle on three and a half stars.