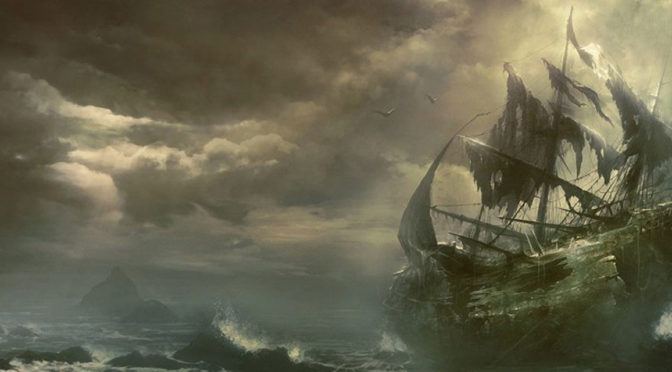 The Bone Ships by RJ Barker
My rating: 5 of 5 stars

DISCLAIMER: I was given an advanced copy of this book by the publisher (via NetGalley) in return for an honest review.

I’m writing this review in July, and I have to say for me this is definitely one of the best books of 2019 so far. Then again, I do like a good maritime yarn, especially when it’s as full of adventure and action as this one.

The book opens with Joron Twiner, Shipwife (captain) of the Boneship Tide Child being divested of his title by the almost larger-than-life ‘Lucky’ Meas Gilbryn. Instead of dying on the point of her sword like he expects, Joron finds himself being taken on as her Deckkeeper (first mate) where he gets to watch her take control of his crew of ne’er-do-wells and his somewhat dilapidated ship.

Following a less than impressive run-in with some raiders, the Tide Child is steered for home, where he (ships are identified as masculine here) is refitted and recrewed for what’s almost guaranteed to be a suicide mission, to intercept and escort the first sea-dragon seen in centuries through the channels of the Scattered Archipelago.

What follows is a maritime adventure in the finest tradition of Patrick O’Brien or C. S. Forester, except instead of the tall ships of the Napoleonic era we have ships crafted from the bones of long dead dragons and powered by wind controlled by the bird-like gullaime, and instead of cannons we have massive crossbow-like gallowbows for ship-to-ship warfare.

Despite a reasonably slow start introducing us to the characters and world of the novel, once the action gets going this is a rollicking good read. Barker shows off his wonderful world-building skills throughout this book, especially in the little details that might normally get overlooked. The world of The Bone Ships is a primarily a matriarchal world and this shows in the way things are referenced. Ships are referred to as ‘he’, the captain of a ship is the shipwife, and crews are addressed as ‘girls and boys’ or ‘women and men’. Little things, such as comparing the size of a gallowbow to the height of a woman, rather than a man, really help draw the reader into the story, while the bigger details, the broader strokes, paint a picture of a living, breathing world that you want to know more about.

Another strong aspect of this book is Barker’s descriptions. I could almost feel the spray of the waves on my face as the Tide Child is racing alongside the sea-dragon (referred to variously through the narrative as a dragon, a keyshan or an arkeesian). During the action sequences the writing becomes almost visceral, and I could hear the thrum of the gallowbows loosing, all but feel the shudder of the decks as bolts slammed into hulls. The excitement and fear of the crew as they fight for their lives becomes damn near intoxicating, and in one of the later chapters when the dragon breaches the sense of awe and wonder was, for me, thoroughly tangible.

I haven’t read Barker’s previous trilogy, The Wounded Kingdom, but if it’s even a half as good as this then I’m certainly going to be moving it up my to-read pile. Hopefully it will be enough to tide me over until the next outing of Joron Twiner, ‘Lucky’ Meas and the crew of the Tide Child.