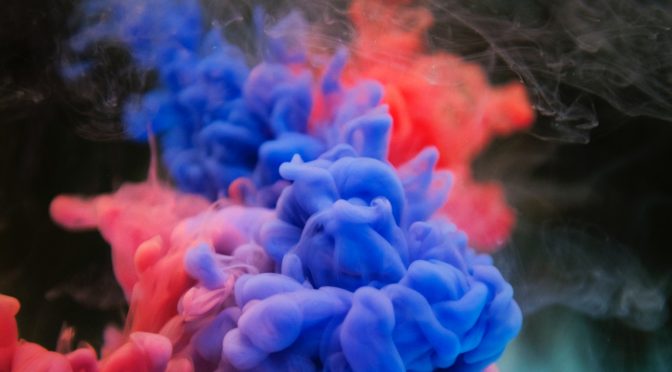 Dreaming in Smoke by Tricia Sullivan
My rating: 4 of 5 stars

This was an interesting read, albeit one which requires a fair bit of work from the reader. It’s a weird mix of cyberpunk meets colonial sci-fi meets social commentary, held together by some fantastic prose. Right from the first paragraph the writing comes across as a strongly jazz-influenced melange of images and ideas and perfectly sets the stage for what quickly becomes a confusing journey through an alien ecosphere, as seen through the eyes of our protagonist, Kalypso Deed.

The night Kalypso Deed vowed to stop Dreaming was the same night a four-dimensional snake with a Canadian accent, eleven heads and attitude employed a Diriangen function to rip out all her veins, then swiftly crocheted them into a harp that could only play a medley of Miles Davis tunes transposed (to their detriment) into the key of G. As she contemplated the loss of all blood supply to her vital organs it seemed to her that no amount of Picasso’s Blue, bonus alcohol rations, or access privileges to the penis of Tehar the witch doctor could compensate for having to ride shotgun to Azamat Marcsson on one of his statistical sprees with the AI Ganesh. She intended to tell him so–as soon as she could find her lungs

Kalypso is a shotgun, a person whose job is to tag along on the dreams of another and keep them free of distractions while they work on whatever it is they’re dealing with. In this context, the dreams are accessed through what appears to be a form of cerebral interface, and allow the Dreamer to focus their normally unconscious creative energies on their own personal projects. The structure of the dreams is provided by Ganesh, the colony AI, and when the AI is corrupted by an unidentified force Kalypso finds herself being dragged deeper and deeper into a literal battle for her own survival and that of the colony she calls her home.

The hierarchy of the colony is heavily stratified. At the top of the ladder are the Mothers, the original female colonists sent from Earth. These are the women who gave birth to the first generation of locally born colonists, though it’s made clear that none of the children are biologically related to any of the mothers in any way; instead, the embryos were created back on Earth and implanted into the Mothers once they arrived at the planet, T’Nane. Below the Mothers are the Grunts, their male counterparts whose sole purpose seems to be to provide physical support and labour. Finally, there are the kids themselves, the generation which Kalypso belongs to, carefully bred to be the best the human race has to offer. Unfortunately for Kalypso, having the best genes doesn’t change the fact that she is essentially lazy and unmotivated. All she wants to do is ride shotgun for Dreamers and listen to music from the archives.

As far as protagonists go, Kalypso initially seems to be a bad choice. Her deliberate lack of knowledge and apparent lack of agency leave her being dragged along in the story, taking the reader with her, but ultimately this works better than you’d think. Through Kalypso’s growing awareness of the world around her the reader is able to grow with her, learning as Kalypso learns (or doesn’t, as the case may be).

One thing that Sullivan does well in this book, apart from the prose, is the way in which she introduces us to and explains the alien nature of the planet the colony is situated on. The local ecology is shown to be far removed from what we recognise as life, so much so that she makes a point of repeatedly telling us, though the various character voices, not to think of it in terms of organisms. It’s a system, distributed throughout multiple layers, each part of the system affecting and being affected by the parts around it, and for me represents perhaps the most innovative element of the book by presenting us with a genuinely alien ecology.

While there are sections of the narrative that I found genuinely incomprehensible, particularly when it comes to some of the Dreamer sequences, overall this is an excellent read. Despite Kalypso’s lack of knowledge or motivation there’s still a strong sense of character growth by the end of the story, and while the ending wouldn’t be considered groundbreaking or particularly fresh to a modern audience, I’d still say it was a satisfying denouement.

This may not be a book for everyone, but if you’re a fan of later cyberpunk or truly alien worlds then I’d say give this one a try.