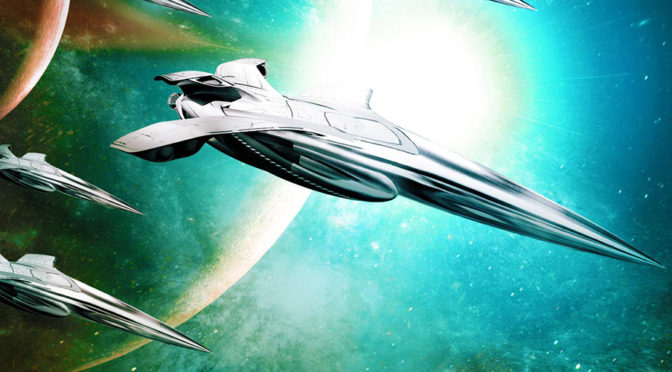 Fleet of Knives by Gareth L. Powell
My rating: 4 of 5 stars

Yet another fantastic outing for the Trouble Dog and her crew.

Fleet of Knives is the sequel to last year’s Embers of War and follows on from roughly where the last one left off. A year has passed and following a debriefing and some repairs Trouble Dog and her crew are off on a shakedown cruise, ostensibly to make sure everything’s running smoothly but also to give the crew a chance to patch up any psychological wounds they might still be suffering, when they’re called on to rescue some merchants stuck on a derelict generation ship. Meanwhile, the former Butcher of Pelepatarn, Ona Sudak, is facing death by firing squad for her past crimes only to find herself being whisked away to act as the biological controller of the titular fleet of knives, the Marble Armada.

What follows is another fun and frenetic slice of space opera from Gareth L. Powell. The stranded merchant crew are forced to face off against a slew of overgrown, psychotic metal crayfish while they wait for rescue. Meanwhile the Trouble Dog has to fight off the alien fleet who having been given the task of ensuring there are no more wars as terrible as the last one have determined that the best way to do this is to simply get rid of all weapons of war.

There’s a lot of well-written character building going on in this novel, but where Powell’s writing really shines is in the action. Whether it’s a last-stand shootout between the merchants and the giant crawdads or an exchange of torpedoes between Trouble Dog and the Marble Armada the action rolls by at an exhilarating pace. There are casualties, and those casualties are hammered home in the reactions of the respective crews represented. I compared the first book to Iain M. Banks and in this second book I really do think that comparison still holds true.

I was really looking forward to this one going in, and I wasn’t disappointed. If you enjoyed the first one, I think you’ll like this one even more. Now I’m just waiting for book three to drop.