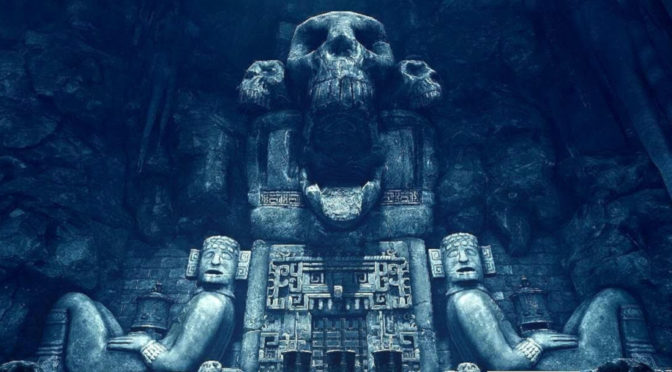 Gods of Jade and Shadow by Silvia Moreno-Garcia
My rating: 3.5 of 5 stars

DISCLAIMER: I was provided with an advanced copy of this book by the publisher in return for an honest review.

I have to admit that I wasn’t entirely sure what to expect when I started this book. I’d seen some of the reviews already doing the rounds, and followed a few conversations about it on social media, and while they were enough to intrigue me, they didn’t really give a clear indication of just where this book would take me.

On the surface this is a relatively straightforward fairy tale, albeit one with a distinctly Mayan influence. The protagonist, Casiopea Tun is initially presented as an almost Cinderella-like character, trapped in a life of servitude to her uncaring grandfather, tormented by her beastly cousin and all but ignored by her resigned mother. However, when Casiopea inadvertently releases Hun-Kamé, the deposed Lord of Xibalba, from his magical prison she finds herself bound to the newly reborn god of death and is soon being whisked across Mexico on a quest to help the god reclaim his throne. Working against her and Hun-Kamé are her cousin, Martin, and Hun-Kamé’s brother, Vucub-Kamé.

As a fairy tale, this works well, drawing the reader slowly into the mythology of the Mayan underworld and gradually introducing the various demons, ghosts, psychopomps and sorcerers of Mayan culture. In itself the surface story is well told, and the descriptions of Xibalba and the underworld are gloriously realised, bringing the Mayan land of the dead to life with a flourish (no pun intended). But there’s more going on here than just the fairy tale right before our eyes.

At its heart, this is a tale of emotional exploration and personal growth. We get to watch as Casiopea begins to question her own place in the world and explores just what it is she wants from life. Hun-Kamé has offered her heart’s desire if she helps him reclaim his throne, but as the narrative progresses she begins to wonder just what her heart truly wants.

As Casiopea herself is growing throughout the novel, so is Hun-Kamé himself. Infected with Casiopea’s humanity, he gradually loses his god-like demeanour and becomes more attuned to the lives around him, seeing the world through human eyes for the first time. With Casiopea’s help he begins to see mortals as more than just the souls he collects when their lives are done.

While this isn’t the sort of novel I’d normally pick up and read, I was intrigued enough by the Mayan influence to give it a try, and on reflection I have to say it’s not all that bad. It certainly kept me reading, and while I found the opening to be a little uninspiring by the end of the book I was definitely wanting to know what happens next. I’m giving it three and a half stars and would certainly recommend it to anyone who likes contemporary fairy tales or who has an interest in mythologies outside those normally found in western literature.