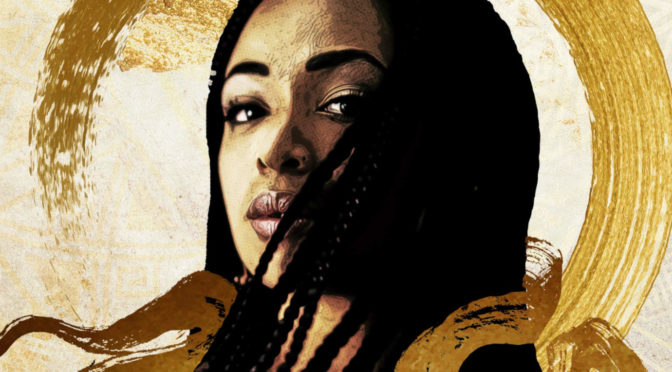 Kingdom of Souls by Rena Barron
My rating: 4 of 5 stars

DISCLAIMER: I received an advanced reader copy of this book from the publisher via NetGalley in return for an honest review.

I’m going to say right from the start that this is one hell of an impressive debut from Rena Barron. Kingdom of Souls is, as far as I can tell, her first published work and shows a lot of promise. I’m definitely going to be keeping an eye out for future works by this author if this is any indication of what she’s capable of.

This is not your typical medieval European fantasy tale. The setting is heavily influenced by African folklore and mythology, and as a result follows a very different formula to the sort of fantasy that’s dominated the genre charts for the last fifty years or so. It centres on the life of Arrah, the daughter of two powerful magic users who appears to be incapable of controlling magic herself despite her heritage. What makes this even more problematic for Arrah is the appearance of the green-eyed serpent, a mysterious spirit that seems to suggest a dark and troublesome future for our protagonist.

When children start to go missing in the city of Tamar, Arrah goes out of her way to unlock her magical ability, enacting a dangerous ritual that trades years off her life in return for the ability to control the magical energies infusing the world. However, the truth is even more horrific than Arrah could have expected, and soon she is fighting to protect not just herself but also the entire world.

There are essentially two halves to this book. The first half focuses on Arrah’s quest for magic, and shows the lengths she is willing to go to in order to get what she wants. This is not some shrinking violet protagonist we’re dealing with here, but a strong-willed, albeit sometimes impetuous heroine, and that strength proves essential later on. As she tries to come to terms with what she sees as her own failure we get to meet her friends, including love interest Rudjek, and learn of the political and social structure of the world Arrah inhabits, and slowly but surely the main plot gathers pace in the background.

The second half of the novel hits you like a brick, and things get very dark very quickly as Arrah is dragged unwittingly into a war between gods and demons. The author really piles on the despair and nihilism in this second half, and that strength of Arrah’s really comes in handy as she fights back against the darkness. Even with a bona-fide god on her side, there are times when it genuinely feels there’s no way that Arrah can possibly prevail against the bad guys. It’s a long time since a book has made me anxious for the main protagonist right up until the last chapter, and for that alone I salute the author. There are no easy wins in this book.

Flicking through the marketing material and other reviews, I’ve seen this book compared to Black Panther and Wonder Woman, and I’m wondering how much of that is down to the setting and tone because honestly, I’m not seeing it myself. Yes, it’s got a strong West African influence, just like Black Panther, but for me that’s where the comparison ends. And yes, it’s got a strong and independent female protagonist with royal roots, just like Wonder Woman, but again, end of comparison. For me this book stands out because of its uniqueness, not because of its similarity to other things that happen to be very popular. I guess what I’m saying is even if you didn’t necessarily enjoy Black Panther or Wonder Woman, if you’re looking for a high fantasy read that’s refreshingly different to the usual medieval European fare then please give this book a chance. I don’t think you’ll be disappointed.