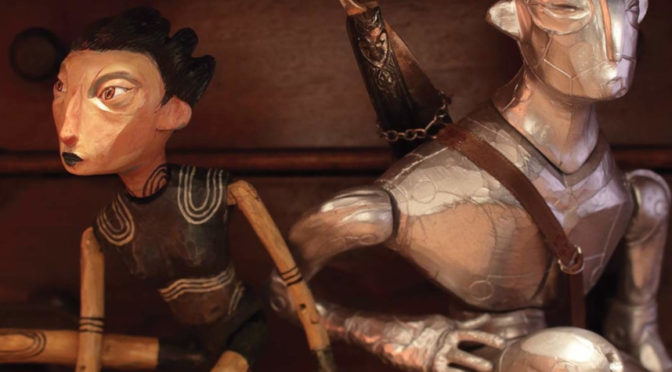 Made Things by Adrian Tchaikovsky
My rating: 5 of 5 stars

It’s fair to say that Adrian Tchaikovsky is one of my favourite contemporary authors. I’ve only read a handful of his works to date but every one of them has been excellent in its own way and the more I read the more eager I become for his next book. Made Things is no exception.

It’s an absolutely delightful novella that follows the trials and tribulations of puppeteer Coppelia as she finds herself getting pulled into the machinations of the local thieves guild and their ongoing struggles against the Magelords of Loretz. Tagging along for the ride are two of Coppelia’s little friends, Tef and Arc, mysterious homunculi who are themselves fighting to find a place in a world that’s much larger than they could ever imagine.

At its heart this is a story about little people, both figuratively and literally, and their struggle to overcome the pressure placed upon them by the bigger, stronger people above them. The homunculi have to learn how to exist in a world built for humans, placing their trust in Coppelia first and then the thieves the puppeteer finds herself running with. Coppelia in turn must overcome her fear of the thieves and face up to the Magelords who may be responsible for the disappearance of her parents years before. And then there’s the petty squabbles of the Magelords themselves, mostly confined to the background in this particular story but still ever-present in the effect those squabbles have on all the social strata laid out below them. While this may be a simple story on the surface, the detail and depth that shows through is simply gorgeous.

As well as a remarkable eye for detail, Tchaikovsky also has this seemingly effortless ability to bring his characters to life, and that’s true even if those characters aren’t human. Whether the characters are uplifted spiders (as in Children of Time) or enhanced anthropomorphic animals (as in Dogs of War), his characters always manage to get under the reader’s skin, and the characters here are no different. Whether we’re sharing Coppelia’s fear and apprehension as she follows the thieves into the tunnels under the Magelords’ domain, or getting swept away in Tef and Arc’s passion as they attempt to rally the rest of their people to help Coppelia, the characters feel like they’re a part of our lives almost as soon as they’re introduced. We want them to win through and make the best out of whatever situation they find themselves in, and that makes us want to keep on reading.

This is definitely a book I’d recommend to fans of high fantasy, especially if you like your fantasy to be very much character driven. It’s the third of Tchaikovsky’s books I’m giving five stars to, and every single one of them is well deserved.