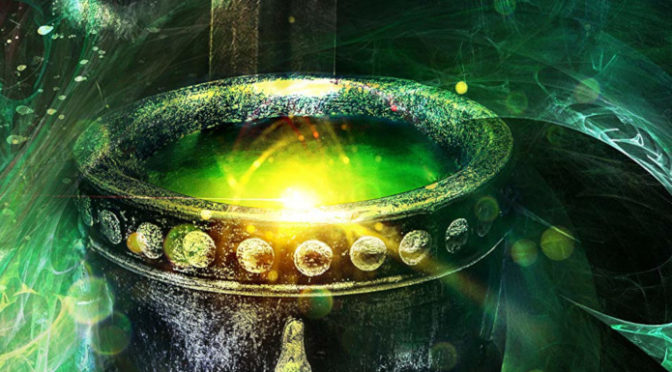 The Goblets Immortal by Beth Overmeyer
My rating: 3 of 5 stars

DISCLAIMER: I received an advanced reader copy of this book from the publisher in return for an honest and unbiased review. My thanks to Flame Tree Press and NetGalley for giving me this opportunity.

In a world where magic is a thing to be feared, Aidan Ingledark is one of those rare individuals known as the Blest, with the power to summon or dispel objects at will. On the run from the authorities he inadvertently finds himself getting wrapped up in a quest to locate and retrieve the mystical Goblets Immortal for the mage Meraude, who in return has promised to help Aidan locate the family he believes he himself dispelled years before. Joining him on his quest is Slaine, a cursed slave girl who seems to have a few secrets of her own.

On the surface this is an intriguing and enthralling story. It doesn’t waste any time getting into the action, and barely lets up the pace from start to finish. The protagonists are thrown from one encounter to the next with hardly any time to recover as they face off against murderous Roma, conniving elves, malicious goblins, cruel nymphs, organised bandits and a seer who may or may not be working for one of the villains. Unfortunately, it’s this haphazard, frenetic approach to the storytelling that ultimately lets this novel down, which is a bit of a shame to be honest.

There are some really nice moments in the story. The character of Slaine is remarkably well presented; a strong, intelligent, smart-mouthed female character who doesn’t let the limitations of her curse hold her back from taking action when needed. Likewise, Aidan’s inability to let go of his guilt over what happened to his family gives the character an interesting hook. Even despite his flaws, and he has many, you still find yourself rooting for him when things start to go sideways. Even some of the minor characters have their moments, such as the four elven witches who are deliciously disturbing. But alas, there are also moments that don’t quite work so well.

There’s a lot of coincidental happenstance going on in this story. From the random encounter with a Roma elder who just happened to know Aidan’s family and just happens to have one of the magical Goblets, to randomly bumping into the mysterious elven witches a few miles further down the road, to the fact that the elves’ slave girl just happens to know all about the Goblets. A lot of things seem to happen merely for the sake of happening, without any real explanation or effort on the part of the protagonists, and then there things that just don’t make any logical sense, like the town that is raided nightly by a group of ‘wraiths’. What makes this last one even more confounding is the fact that when Aidan and Slaine go to help fight off the wraiths on the second night, the villagers turn against them and end up chasing them out of town without so much as a rudimentary explanation.

This could have been such a wonderful novel. With a bit more detail in the world building and a bit more pacing between the various hazards and encounters, with less reliance on happenstance and more focus on the protagonists’ individual agency, this could have easily been a four-star read. Unfortunately, it only just manages to scrape in with three, though I am still going to keep an eye out for book two.