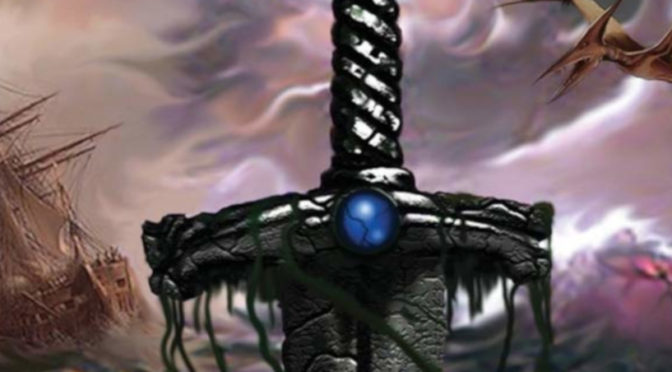 The Sea-Stone Sword by Joel Cornah
My rating: 4 of 5 stars

All Rob Sardon wants, more than anything else in the world, is to be a hero. He wants the world to know his name, to revere his name and for songs to be sung of his exploits even after he is long gone. So when he is sent to live with his uncle in far off Khamas he begins a journey that will see him go from being a naive, thirteen year old boy to something more. Just maybe not the hero he imagines himself to be.

This is an interesting and engaging first novel by author Joel Cornah, and there’s a lot more to it than a cursory read of the blurb might suggest. What seems to start out as a classic Hero’s Journey soon becomes an exploration of what it means to be the hero, and the effect that journey has on the hero’s companions and friends. While Rob is driven by an insatiable need to become the scourge of all evil, those closest to him pay the price for his ambition. The people he loves are killed to teach him a lesson, his friends and comrades abandon him, and his goals are used to draw him deeper and deeper into the villain’s plans.

For much of the narrative Rob’s main focus is on finding the eponymous Sea-Stone Sword, a mighty weapon forged with the power of the Sea God in a time long forgotten. For many the Sword is nothing more than a myth, but for Rob it is the very essence of his quest and if he can just find and wield the sword then he will become the hero he has always known himself to be. Rob is so wrapped up in his own personal narrative that he even fails to acknowledge the warnings embedded in the myth; that any who hold the Sword shall ultimately become the evil they wish to defeat.

As well as presenting an alternative take on the Hero’s Journey, this book also provides a very different sort of fantasy world to what most people might expect. There are no elves or dwarves, no hobbits, no aged wizards in spindly towers manipulating eldritch forces from the dawn of time. No, instead we get intelligent dinosaurs of all shapes and sizes, magically infused pterosaurs that suck the life force out of their victims, and the Pengs, a race of powerful, aggressive penguins. The author has gone to a lot of trouble to infuse the world of Diyngard with a lot of history, much of which is hinted at by the various characters. This is a world that has been built up over time, and as a result it adds a ‘lived-in’ feel to the world in general and especially to the various places and cultures we’re introduced to in this first book.

On the subject of characters, there are so many major and minor players in this story that that narrative takes on an epic feel, even though the core arc of the story stays focused just on Rob. Even more impressively, all of those characters have something to say, some small gem of wisdom or some well-intentioned insight that adds meaning to the action taking place. Even the least involved of the characters make an impression, both on Rob himself and on the story as it unfolds.

All-in-all this is an impressive debut by an author with a lot of potential. It’s also a fantastic example of how small press publishers are keeping genre fresh by publishing the works that the larger, more traditional publishers might shy away from. If all you’re after is typical western medieval fantasy with elves and dwarves then this really isn’t for you. However, if you want a cracking adventure yarn that throws convention in the bin and follows its own path then grab yourself a copy of this book and consume it forthwith.