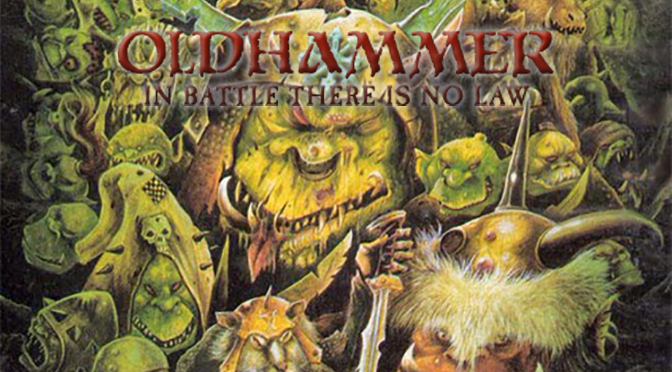 When I got home from work tonight there was lovely little surprise waiting for me. Well, maybe not that much of surprise, as I knew that it was being delivered today, but it was still a lovely little something to come home to. For today, I received my first delivery of orcs from Mirliton SG.

Let’s just take a short pause here and have a proper look at those blister packs. They’re the same size and shape as used by Games Workshop throughout the late eighties and early nineties. Even the blister packs are Oldhammer. Also, by the time I got to this point in the unpacking process I was already jiggling up and down like an excited schoolgirl…

Orcs with some different hand weapons.

The orcs in charge of other orcs.

These lovely greenskins are the first of my ‘required’ units for a Warhammer Fantasy Battle 3rd edition army, and I’m planning on getting them painted up as quickly as possible. I’ve already promised myself that I won’t buy any more until these are done, but anyone who knows me will know that this isn’t the sort of promise I can guarantee keeping. Ho hum.

The figures themselves are all Nick Lund sculpts from Grenadier’s Fantasy Warriors range, dated 1990-1991 if I remember correctly. They were designed for use with the game of the same name (intended, I suspect, of being a rival to GW’s own Warhammer). I’ve not popped open any of the blister packs yet, but from what I can see through the plastic they look like very good casts, with few flash lines visible.

Price-wise, even including DPD Express delivery from Italy to the UK they still worked out at slightly less than £2.00 per figure. (Buying online obviously includes some sort of built-in discount, as on the Mirliton store these packs are listed at €8.16 each, while the price sticker they’re sporting says €9.96.) This makes them comparable to most of the manufacturers and distributors I’ve found so far, and next to some is downright cheap; a number of manufacturers I’ve found are charging £5.00 or more per figure, though in a lot of cases those figures are very well sculpted and cast. Now, while I couldn’t justify spending that sort of money on figures for an army I might spend it on the occasional ‘just for fun’ mini.

The thing I’m most impressed with is the speed with which Mirliton turned my order around. I placed my order last Friday evening, and the figures arrived today, a week later. I’ll definitely be using them again for a large portion of the rest of my orc & goblin army. Hopefully I won’t go completely barmy and buy them all at the same time; I think my partner would quite possibly decapitate me with a spoon if I did that, and in truth she’d be justified in doing so.

So there we have the first of my 28mm WFB3 orc & goblin horde. I’ll be back at some point with updates as I work my way through painting them, but for now I’m going to go and stare lovingly at those blister packs some more and pretend I’m a teenager again.