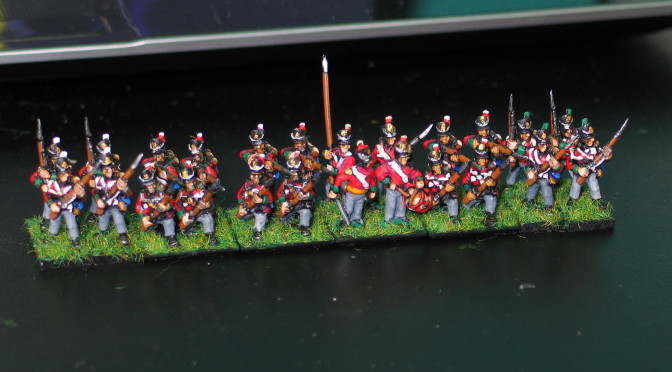 Back in the eighties, when Rick Astley, Kylie Minogue, Madonna and the Eurythmics were all cresting the charts, when leg warmers and figure-hugging bodysuits were all the fashion, I was spending most of my free time fondling and playing with some very, very tiny people, and doing so with the assistance of my friends.

I can’t remember exactly what year it was that I had my first taste of tabletop fantasy wargaming, but I do know it was sometime before It Bites had a hit with ‘Calling All The Heroes‘ (I remember hearing this song quite regularly during some of my later games) so I’m assuming it was around 1985-1986. Using whatever tiny, lead-based fantasy toy soldiers we could get our hands, my friends and I would regularly meet up and fight over a certain patch of carpet (usually the patch of carpet in my bedroom because I had the most space to spare, though occasionally we would fight over the patch of carpet in Justin’s bedroom) until either one side won, or (as was more often the case) we got distracted by the latest edition of White Dwarf magazine.

Over the years my personal figure collection went from a small handful of hobgoblins and orcs, to several armies of a couple of hundred figures each. My modelling and painting skills went from ‘obvious beginner’ to ‘award winning’ (literally – I was awarded second place at the 1988 Golden Demon Awards in the Scratch Built Vehicle category), and by the end of the eighties I had turned my hobby into an occupation by being offered (and accepting) a job working for the local branch of Games Workshop. All in all, I think it’s fair to say that miniature wargaming (and the associated hobby of tabletop role-playing) was a big part of my life for a number of years, and this probably has a lot to do with the person I am today.

My tenure at GW Sheffield only lasted a few years; for reasons I won’t go into I was ‘let go’ by the company in 1992, but I still stayed in touch with the hobby. I branched out from Games Workshop’s core products and experimented with a little historical wargaming, mainly Napoleonic era but also touching briefly on Ancient Roman era stuff. I painted figures to supplement my income, and maintained contact with a lot of the friends I’d made through the hobby. But as the saying goes, all good things must eventually come to an end. Slowly my contacts dried up and my involvement in the hobby went from regularly attending gaming events to just playing over the dining table with a few friends. I finally turned my back on wargaming completely (or at least, I thought I had) about a decade ago, when I gave away or sold almost all of my wargaming figures. I kept a hold of a few of the books and boxed-sets I’d collected, but pretty much everything else went.

Well, a decade (ish) has passed, and suddenly I find myself rediscovering my interest in tabletop wargaming.

It started with my housemate digging out her own wargaming collection, amongst which I spotted a game I’d never seen before. This led to brief discussion about wargaming, which in turn reminded me how much fun I used to have pushing those little metal figures around a battlefield. It also reminded me how much I enjoyed painting the blasted little things. And thus I began to considering taking up both the brush and the general’s cap once more.

I spent a couple of weeks thinking about what would be involved in getting back into the hobby. I’d been away long enough for the entire industry to have changed beyond recognition as far as I was concerned. Games Workshop is still out there, but what they’re doing now is nothing like the games I played during those golden years. I discussed my plans with a couple of friends and bought a couple of rules systems, and eventually I was convinced that doing this would be a good idea. Once again I find myself dipping my toes into the sea of tabletop wargaming.

Now, bearing in mind that I have more or less nothing of my old collection left, with the exception of some old Warhammer Fantasy and Warhammer 40,000 books (more about those in a later post), this basically means I’m going to be starting again from scratch. I’ve already decided that I want to do a bit of historical (Napoleonic) and a bit of fantasy wargaming, and after some research and a few chats with friends I settled on Warlord Games’ Black Powder system for the historical gaming, and Mantic Games’ Kings of War for the fantasy gaming. I then had a think about the figures I’d need, and as I was planning on buying a couple of armies for each game, and as I knew I’d want a lot of figures in each army, I made the decision to go with 15mm miniatures for Black Powder (mainly because this was what I’ve painted and used in the past) and 10mm miniatures for Kings of War. Using these scales would allow me to buy a sizeable number of figures for relatively little outlay, and I knew from past experience that painting them would be quick and easy.

The problem is, I still like the bigger 28mm figures, and I especially want to paint a decent army in that scale. Even after I’d picked my armies for the other two scales I still found myself looking at what was available in 28mm and wanting to buy everything I could see. But what would I use them for? Games Workshop no longer make Warhammer Fantasy Battle, and I’m not familiar enough with the other games to know if they’d suit my tastes in the long run. That’s when I discovered the Oldhammer community, a group of people scattered around the internet who all like to play the older versions of Warhammer and think that the golden days of tabletop wargaming was some time between 1985 and the early nineties. Just like me.

So as well as building armies for use with the two previously mentioned games, I’ve now also set myself the task of putting together an army of 28mm orcs and goblins. Fortunately I’m still in touch with an old friend who has a dwarf army and he’s expressed an interest in gaming again, so I won’t just be buying and painting figures for the sake of it.

And finally, there’s Mantic Games’ Deadzone. This was on special offer yesterday, and looks like it shares a few similarities with another old Games Workshop game I used to enjoy, so after making sure my housemate would be interested in playing it I ordered a copy. So there’s another game to add to the list, and another bunch of miniatures to add to the ‘to-be-painted’ pile.

Over the next few weeks and months I’ll be posting a few articles discussing each of the games I’ve mentioned, and will also try to offer an honest review of each as I play it. I will also be sharing some details of my own wargaming history, as well as exploring the history of Games Workshop’s Warhammer range of games in particular, at least up until the early-mid nineties, any way.

I will also be posting a lot of pictures over the coming months as I paint up more and more tiny mens. To get the ball rolling, here’s where I’ve got to so far…

Warlord Games’ Black Powder is a historical wargame designed to fight battles in the horse and musket era, i.e. the eighteenth and nineteenth centuries. My main area of interest in this era is the Napoleonic Wars, particularly the Peninsula War and the Hundred Days. To this end, I’ll be collecting and painting an army for both the British and the French.

In Black Powder, armies are divided up into Brigades, which are then further divided up into units, or battalions. A single battlefield unit represents either a Battalion of infantry, a Regiment of cavalry, or a Battery of artillery. To make life as easy as possible for myself I’ve decided to buy and paint each army in Brigades, starting with a British infantry Brigade.

I ordered my first selection of infantry from Essex Miniatures last month, and over the last few weeks have been painting them in batches of eight. I now have the first Battalion finished. Here’s a picture:

As you can see, they’re not spectacular but I’m pleased enough with them. Given that these are the first miniatures I’ve painted in over a decade I’d even go as far as to say I’m really happy with them.

Now I have the first Battalion (unit) painted, I’ve moved on to the next project in my list: 10mm miniatures for Kings of War.

In a dwarven army (my first choice for Kings of War), the standard infantry troop consists of ten warriors, and as the rules don’t require the removal of injured fighters until a unit is completely destroyed, this means I can base my infantry in tens. So, after finishing the Line Infantry above, I started painting ten even smaller dwarves. Here they are, waiting for the grass to grow beneath their feets.

I’ll be adding another base of ten infantry to the unit over the next week (I’m currently only painting at weekends), and once they’re done I’ll be moving on to the next item in my project list: 10mm Elves. I’ve also decided to do a 10mm human army (because despite my extensive background with Warhammer, I’ve never fielded a human fantasy army), as well as the 28mm orc and goblin army and Deadzone miniatures mentioned above.

Alongside the wargaming figures, I’ve also decided to paint some figures just for fun. I’ve seen a few from Dark Sword that I really like the look of, but my first ‘painting for fun’ project will be these two chaps:

I don’t know a lot about the game Frostgrave, but when I saw these two I immediately thought of Fafhrd and the Gray Mouser from Fritz Lieber’s Lankhmar series, so I’m going to painting these two to match those worthy (ish) heroes as much as possible. This may mean giving the thief a slightly longer, thinner sword to do Mouser’s Scalpel justice, but otherwise I can probably paint them as they are.

And that, dear friends, is where I currently stand with my return to wargaming and painting of tiny mens. I hope that some of you will find this change of direction interesting enough to hang around, and hopefully I’ll be able to post a whole bunch of new stuff on a fairly regular basis from now on.

Thanks for reading. See you again soon.