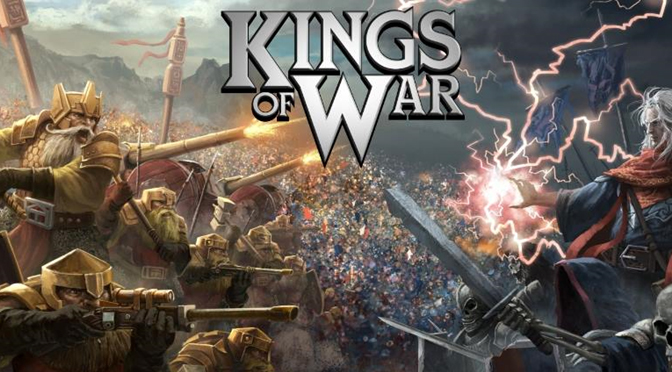 Following on from my post at the weekend about getting back into wargaming, I decided the first thing I need to do is to draft up a test army or two (or three) for Kings of War. As I’m currently painting some 10mm Dwarves already it makes sense to turn my attention to these doughty little chaps first.

As this is going to be my first experience with Kings of War (KoW), it’s a safe bet that I’m not going to be completely up-to-speed with all of the special rules, or the various strengths and weaknesses of each of the races presented in the rulebook. With that in mind, what follows is intended as nothing more than a rough draft of my first army, and will be subject to change as I learn more of KoW’s idiosyncrasies.

The first thing I needed to do was figure out how armies are constructed in KoW. In brief, a KoW army is made up of a number of units of varying sizes, and supported by heroes, war engines and monsters. Each unit is identified as a Troop, Regiment, Horde or Legion, with the number of figures per unit being determined by the specific type of combatant represented (i.e. a Troop of infantry is 10 models, a Regiment of cavalry is 10 models, and so on).

Each army can contain any number of Regiments, Hordes or Legions, limited primarily by the total points value agreed for the army. Some other limitations may also exist, though this is generally only for unique units. In addition, some units are identified as Irregular, in which case they are treated as Troops for the purpose of army composition, regardless of the exact size that is purchased.

Regarding Troops, an army can contain two of these for each Regiment it has, and four per Horde or Legion. So, if you have three Regiments and a Horde in your army you can also include up to ten Troops, points allowing.

Once you’ve got the core of your army, you then add on the special units: War Engines, Heroes and Monsters. For every Regiment you can choose to field one special unit (i.e. one War Engine or one Hero or one Monster), while for every Horde or Legion you can include one of each type of special unit.

While this may all seem a bit complicated at first, in practice it’s actually quite simple once you get the hang of it, though I did find that I had to keep a running tally of each type of unit I was adding to my army list to make sure I didn’t take too many specials.

Okay, so now we know how the army is constructed, let’s spend some points.

As this is going to be a test army, I settled on a starting points value of 2,000 points. I remember from my old Warhammer days that this would usually be enough for a decent size starter army, and figured that as I’m going to be working in 10mm this would probably be good place to start.

For me, the biggest apparent strength of a dwarves army is its melee troops and its war machines. To take advantage of this, I wanted the core of my army to be made up with good, strong infantry units backed up with as many war engines as I could realistically field. With this in mind, my first selections include a couple of Ironclad Hordes of 40 infantry each. Ironclads are the standard infantry of a dwarven army, so it stands to reason that they should be the main bulk of my core forces. I also decide to add a Shieldbreaker Regiment (shock troops with double-handed weapons) and an Ironguard Regiment (elite veterans), each containing 20 infantry. This gives me a total of 120 melee infantry in four units, and all for the low, low price of just 650 points. This also allows me to field up to twelve Troops and up to eight specials (though no more than four of any one type).

I now needed to add in some fire support to provide back-up for my melee core. Dwarves aren’t generally known for the missile troops, despite their ingenuity when it comes to things that go boom (i.e. gunpowder weapons). Even so, I’m of the opinion that every army should have some missile troops, so I decided to add in a couple of Troops of Ironwatch Crossbows (2 x 10 infantry) and a Troop of Ironwatch Rifles (10 infantry). This gives my army some ranged capability to cover the shock troops as they charge into combat. This takes my running total up to 150 infantry, and 965 points.

I also wanted to include some cavalry, as I absolutely love the concept of dwarven cavalry as presented in KoW – basically, a bunch of angry dwarf berserkers riding angry giant badgers. So, to appease my inner child I added one Troop of Berserker Brock Riders (5 cavalry) for 135 points, taking my total points value up to 1,100.

So now that I’ve picked the bulk of my rank and file it’s time to add in some of those special units I mentioned. As I’ve already said, one of the big strengths of a dwarf army that I remember from my Warhammer days is their reliance on war engines, especially ones that go boom. For this reason, I knew that I wanted to include as many War Engines as possible, and with the units I’ve selected above I’m allowed up to four in total. In the end I opt for two Ironbealcher Cannons and a Jarrun Bombard, all at 110 points each. For my fourth choice of war machine, I actually choose to take a Steel Behemoth, which sounds like some sort of heavily armoured flame tank from the description, and sets me back another 250 points. This brings my running total up to 1,680 points.

Even though in my mind the Behemoth should be classed as a war machine, it’s actually identified as a Monster in the army list, so that leaves me free to choose up to three Heroes to command my army on the field, and 320 points to buy them with. After quickly looking through the choices available I finally settle on adding a Stone Priest with the Bane Chant spell for 120 points, an Army Standard Bearer for 50 points, and the unique Hero Garrek Heavyhand for 150 points, bringing my overall total to a perfect 2,000.

Now that I have my first dwarven army worked out the next step is to buy and paint the figures. As I’ve already mentioned a few times I’m going to be using 10mm figures for this game, so buying the miniatures isn’t going to be too expensive. I already have enough minis from Pendraken’s Dwarves and Hill Dwarves ranges to make up both Ironclad Hordes, and enough Crossbows and Handgunners to make up the Ironwatch Troops, all of which set me back just short of £30.00 including bases. If I’m being honest I’m not entirely impressed with Pendraken’s sculpts, so for the rest of my army (including future reinforcements) I’ll probably be buying from Magister Militum, where I can pick up packs of thirty infantry (including command group) for a £5.25 each. I also purchased a couple of cannons and bombards from Pendraken, at a price of £1.95 each, though I may replace these with appropriate minis from Magister’s range at £5.25 for three, while the Steel Behemoth will be suitably represented by Magister’s Steam Powered War Cart, again for the price £5.25. Finding giant badger riding dwarf berserkers in 10mm scale is proving difficult, so these will be represented by dwarves on bears (with the bears painted black and white, of course) and I can pick twelve of these up from Magister for (you guessed it) £5.25, and this will leave me with enough spares to increase the unit to a Regiment at a later date. Add in a pack of command figures for the personalities and the total cost of the army (including what I’ve already spent) shouldn’t rise much above £60. That’s sixty quid for an entire army of 150 infantry, 5 cavalry, 4 war machines and 3 heroes. That to me sounds like a bargain, though I am comparing this to the average cost of a similar sized army from a certain UK-based gaming company I used to work for…

Anyway, that’s my plans for my first 10mm fantasy army. I’ll be back at some point with updates on how the painting’s going, and I may also post up an overview of the Elven and Human armies I’m also considering building.